The COMX-35 is my favourite computer in the Emma 02 Emulator. Mainly because this was my first computer and got me interested in the RCA CDP1802, computers and software development. The COMX is the only computer in this collection that I actually owned.

The COMX-35 has a keyboard with an integrated joystick in place of cursor keys. It was relatively inexpensive and in the Netherlands it came with a ‘large’ collection of free software. COMX-35 was manufactured in Hong Kong by COMX World Operations Ltd. The picture above is the black model, it also came in white and was released a few years after as a COMX PC-1 with an improved keyboard.

Different HW extensions were made available, including an expansion box allowing 4 extension cards to be connected simultaneous. Cards were available to connect floppy disk drives, printers (parallel, serial and thermal) and an 80 column monitor. A 32K RAM extension was available as well, however the additional RAM was not usable or supported by COMX BASIC.

The design of the COMX-35 is quite similar to the Pecom 64 and the Telmac 600, even the BASIC is based on the same code as these computers. All 3 were based on Quest Super BASIC which is running in this emulator on the Elf (Cosmac, Netronics or Quest).

The 2 best sources for COMX information on the internet are:
1.  COMX Club Netherlands with lots of documentation and software
2. The Comx-35 on Wikipedia with some detailed info about HW 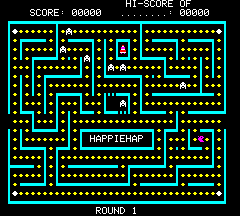 On the COMX Club Software pages you can download ‘.comx’ files with all kinds of software made for the COMX. All software is also included in the installation package.